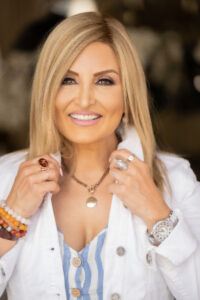 Hengameh was born in Lahijaan, Iran. Ever since childhood, she had a great passion for singing. Hengameh’s father was first to detect this passion. The never ending love and support of her father, a professional Ney and flute player, further motivated and encouraged her to take music lessons with some of the masters of Persian classical music.

Throughout her school years, Hengameh participated in numerous local and regional talent contests and always managed to come first amongst her peers. Hengameh never stopped thinking about her life long dream of becoming a singer. Hengameh eventually realized that she had no choice but to leave her homeland and migrate abroad if she was ever to pursue her dream.

Her debut album, “Baraye Didane Tou” was the result of a five year effort, which was cherished by millions across the world. This intense interest and loyal fan support paved the way for the release of a second album, “Artesh-e Solh”. Since then, Hengameh has released numerous singles and has achieved the pinnacle of her fame. Her contributions to Iranian music and her one-of-a-kind voice has made her a prominent figure in the Iranian music industry.