Pooja Batra was born in India to an army officer and his wife. Early in life she showed grit and determination winning multiple track and field events on a national level. She shot to fame when she was crowned Miss India in 1993. She quickly went on to become one of the top supermodels in India walking the ramp in over 250 fashion shows in India and abroad. Soon, Pooja set her sights on pursuing an acting career. In 1997, her first feature film Virasat (1997) sky-rocketed her to instant stardom with stupendous box office earnings and got her critical acclaim. For her portrayal of the betrayed lover in Virasat(1997), she won the Zee Cine Award for the Best Supporting Actress and was nominated for Best Supporting Actress at the Filmfare Awards. This was followed by her second film Bhai (1997) which was also a box office hit confirming her appeal to the masses. She has subsequently starred in over twenty films including Dil Ne Phir Yaad Kiya (2001) and Haseena Maan Jaayegi (1999), establishing herself as an accomplished actress. Her latest film Taj Mahal: An Eternal Love Story (2005), in which she portrays Queen Noorjehan, is a highly anticipated film to be released in mid 2005 on the 351st anniversary of the Taj Mahal. Pooja maintains homes in Bombay and Los Angeles. 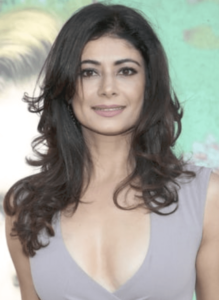 Miss India 1993.
Almost joined the Indian Air Force as a pilot.
Launched and was spokesperson for Head & Shoulders in India.
Was the most sought after catwalk model and has walked the ramp in over 250 fashion shows in India and overseas.
Graduated from the prestigious Fergusson College in Pune, India, majoring in Economics.
Has an MBA in marketing from Symbiosis College, Pune, India.
She created a sensation when she first appeared in her first film Virasat which shot her to instant fame & critical acclaim.
Her film Bhai (1997) was a box office hit. She was paired with Sunil Shetty. They were cast in three more films together: Farz (2001), Kuch Khatti Kuch Meethi (2001) and Ittefaq (2001).
She was paired opposite Sanjay Dutt in Haseena Maan Jaayegi (1999) which was the biggest box office hit of 1999.
After Virasat (1997), Director Priyadarshan cast her in three more films: Megham (1999), Chandralekha (1997) and Kashmakash.
She was nominated for Filmfare, Screen, Sansui and Zee Awards for the Best Supporting Actress in the film Virasat (1997). She won the Sansui Award for the Best Supporting Actress in 1997.
Ambassador for Parag Sarees. Was signed by Hindustan Lever in an exclusive contract for three years for Liril soap.
Has volunteered time and money to charitable causes including AIDS (Mukti Foundation), Homeless children, the Bombay Police Department and injured soldiers in the Kashmir War.
Did pro bono work in the film My Little Devil (1999) (translated as “My Little Devil” in English) which was subtitled in Hindi, English and French to raise funds for the poor children in India. The film was co-produced by NFDC-La Fete (Canada) and directed by Gopi Desai. The film was screened at the 24th Annual Montreal World Film Festival, 2000; Chicago International Children’s Film Festival, 2000; 10th Annual Philadelphia Film Festival of World Cinema, 2001 and the Indian Film Festival in Malaysia, 2005.
Her Film Chandralekha (1997) broke records at the box office and was re-made in four different languages (Malayalam, Hindi, Telegu, and Tamil).
She turned down the film Only You (1999). The role was subsequently given to Sushmita Sen.
Plays Queen Noorjehan in the highly anticipated film, Taj Mahal: An Eternal Love Story(2005).
Starred in director Nitish Roy’s shelved film ” Heartbeat” opposite Aryan Vaidm. This was in 2001.
Starred in Basu Chatterjee’s shelved film “Hum Tum “(1997).
Starred in the shelved movie The Fine Arts “Khajuraho”(2000) Starring Raveena Tandon,Deepti Bhatnagar,Pooja Batra,Sharad Kapoor, Gulshan Grover, Divya Dutta,Bikram Saluja,Om Puri, Music Anu Malik, Produced by Sunil Bohra, Directed by Aruna Raje.
Married Nawaab Shah in 2019.
Played and important part in coordination with Hollywood actors like Sylvester Stallone, Denise Richards and Brandon Routh to act in Hindi film Kambakkht Ishq 2009.