Sharyn Wynters has always had an eye for the stage. But, her life has taken many turns, granting her the chance to evolve as a model-actress-naturopath-author-singer and champion for humanity. After high school, Sharyn entered a beauty pageant and became Miss Pennsylvania in the Miss World contest. This led to a modeling job in New York for Oleg Cassini, the world-renowned designer (and dress designer for Jacqueline Kennedy). While modeling, Sharyn met actress Bobbi Shaw, who convinced her to pursue a career in acting. As a young woman in her early twenties, she packed up her things and drove to LA-and within two weeks, she was cast as Cat Girl in the original Batman TV series . This led to a TV and film career, with credits including: The Rockford Files, Kojak, The Odd Couple, Hook Line & Sinker, Westworld, and Funny Lady. With a growing acting career, Sharyn’s life took another turn. She developed cancer and was told it would eventually take her life. Refusing to accept this, she traveled to Texas to enlist the help of Dr. William Donald Kelly. Her decision not only left her cancer-free, but also gave her a new passion. Sharyn studied dozens of healing disciplines including Metabolic Nutrition, Cranial Sacral, Acupuncture, Reflexology, Meditation, Pilates, Hypnosis, Rolfing, Feldenkrais, Yoga, and many others. She acquired a degree as a naturopath from the Clayton School of Natural healing, and a degree from the Santa Monica School of Massage Therapy. After many years as a naturopath, Sharyn decided to write a book. She is co-author of, The Pure Cure: A Complete Guide to Freeing your Life from Dangerous Toxins-a reflection of over 30 years of research into the dangers of the toxins in our modern living environment and how to avoid them. Of this part of her life Sharyn says: An important part of healing is learning to listen to your inner voice. Healing is an adventure! Illness is our body trying to teach us how to be well. Sharyn has a strong commitment to humanity and a passion for making a difference. Following the release of her book, she dedicated herself to influence as many lives as possible- in as many ways as possible. She became a popular speaker at conferences and seminars; she hosted a Talk Radio show on health and healing; and she worked with Fran Drescher, creator of the Cancer Schmancer movement (www.cancerschmancer.org). Sharyn is the recipient of the Naturopathic Doctor of the year award from the Qi Gong Congress (2011) and the Lifetime Achievement award from the Amazing Women Organization (2010). At the turn of the millennium, Sharyn asked herself, “What else have I always wanted to do that I have not already done?” The answer to that question came passionately-“…to be a torch singer of romantic jazz.” Sharyn contacted an old friend, Dini Clarke (Billie Holliday’s piano player)and began to take voice lessons. Within a year and a half she recorded her first album, “Reflections of Love.” Of this experience Sharyn says: As long as I can remember, I’ve wanted to reach out and touch the souls of others. First it came through my modeling and acting, then by healing therapies. Now I am overjoyed that I can also heal through song. Then, on a Sunday morning in mid 2018, after a 40-year hiatus from acting, Sharyn was overcome with a strong desire to return to acting. She said out loud, “I want to get back into acting!” That same day, Sharyn went to a baby shower and sat next to a talent agent who asked, “Have you ever considered getting back into acting?” Within weeks, Sharyn re-connected with Bobbi Shaw-Chance (now a renowned acting teacher ) and following a showcase, was offered the starring role in Night Mistress. With the ability to captivate an audience and years of experience, Sharyn Wynters has begun yet another adventure. 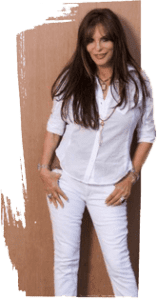